Autoimmune Disorder Treatment on the Horizon 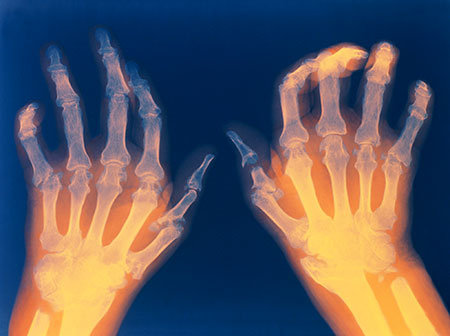 Over 23.5 million Americans are afflicted with autoimmune diseases, including rheumatoid arthritis (RA), an autoimmune disease affecting approximately 1.3 million Americans.  In a case of mistaken identity, the body’s immune system mistakes its own tissues for foreign invaders, such as bacteria or viruses and develops antibodies to destroy the “invaders” in the synovium.  Currently, there is no cure for rheumatoid arthritis and the treatments are often saddled with a variety of side effects, some as severe as the disease.

Autoimmune disorders such as rheumatoid arthritis may become easier to treat with new discoveries.  At the University of Colorado Boulder, researchers have recently discovered a compound that inhibits a protein essential to signaling the body to attack the healthy tissues.

“We have discovered a key to lock this protein in a resting state. This could be paradigm shifting.” – Hang Hubert Yin, Biochemistry Professor

In this study, researchers from Tsinghua University, the University of Tokyo, and Peking Union Medical College Hospital were involved in the development and research, examining 14,000 small molecule compounds in order to discover compounds that would bind to a protein responsible in large part for causing arthritis symptoms.

The study focuses on preventing the protein responsible for causing symptoms from initially activating, unlike current treatments which aim to halt progression after the initial activation.  Researchers intend to strike at the root of the problem before it even has a chance to develop and require treatment to stop or reverse the damaging effects of rheumatoid arthritis.

The protein responsible, known as Toll-like receptor 8 (TLR8), senses a virus or bacteria and sets off to attack the perceived invader, but does so excessively. When this happens, inflammation and damage occur to the affected patient. Researchers have long known about the effects of TLR8, but have not yet been able to design effective treatments for the symptoms of the illness.

“Given the prevalence of these diseases, there is a big push for alternatives.” – Hang Hubert Yin

TLR8 is difficult to target directly because of its location within endosomes, tiny bubbles within the cell.  However, a molecule known as CU-CPT8m can bind to TLR8, acting as an inhibitor and preventing the inflammation that is at the source of suffering for patents with arthritis, and other autoimmune disorders as well.

Initial results from the study are promising, with the potential to be life changing for millions of people across the world, representing a turning point for people with a variety of autoimmune disorders, not only including arthritis but also the more uncommon Still’s disease, which primarily affects children.  Hubert-Yin, one of the researchers behind the groundbreaking study, has filed a patent application and hopes to move forward quickly into animal studies and clinical trials.

If CU-CPT8m proves to be an effective treatment, it could present a huge breakthrough for the millions of people worldwide who suffer from autoimmune disorders living with chronic pain, inflammation of internal organs, rashes and fever in their daily life.  Autoimmune disorders are not only painful, they can cause permanent damage to organ function, making this a potentially life elongating discovery.  In the meantime, the new compound can serve as a tool to understand the role TLR8 and the other nine toll-like receptors play in the development of autoimmune disorders.