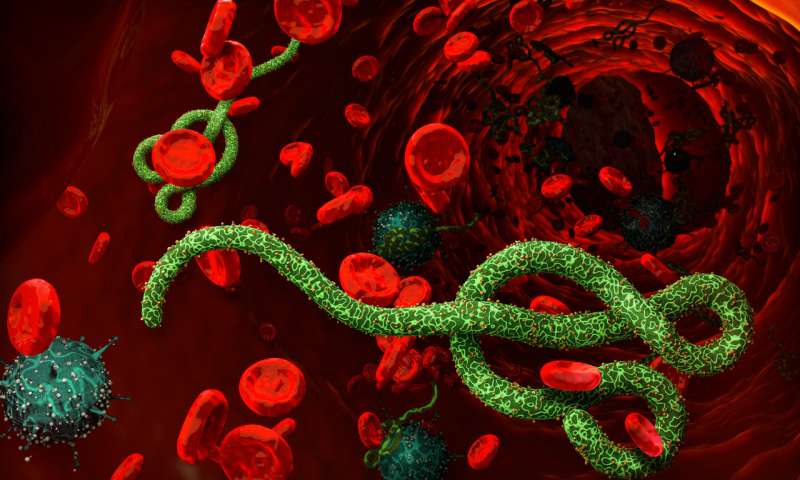 The Ebola virus, discovered in 1976 near the Ebola River that can cause a severe and often fatal disease called Ebola virus disease (EVD).  Since the first discovery in 1976, there have been sporadic outbreaks of EVD, with the most recent one in 2013-2016 affecting West African countries, mainly Guinea, Sierra Leone and Liberia.  Fruit bats are the most likely reservoir of the Ebola virus.  Ebola is deadly in about 70% of those infected with Ebola; the 2013-2016 Ebola outbreak in West Africa claimed more than 11,000 lives.The virus is primarily transmitted through physical contact with an infected surface or person, unlike many other viruses and patients must be symptomatic to further the spread of the disease. There are no proven treatments or vaccines for Ebola virus disease, although several vaccines are at various stages of development; having an effective vaccine could potentially help hundreds of millions of people who are at risk from Ebola.

Symptoms of Ebola include a high fever, sore throat and lack of appetite in the early stages. As the disease progresses, it causes internal bleeding as well as external bleeding, such as from the eyes or in the form of vomiting and coughing blood. Because there is currently no vaccine to protect from Ebola, the only way to help people afflicted with Ebola and prevent the spread of the virus is to treat it after it becomes symptomatic – and therefore dangerous.

The Defense Threat Reduction Agency’s Chemical and Biological Technologies Department, the US Army Medical Research Institute of Infectious Diseases (USAMRIID) and the pharmaceutical company Merck recently partnered to work on developing an Ebola vaccine to potentially prevent future outbreaks of Ebola, which is being referred to currently as V290.  The Merck V290 vaccine offers excellent and rapid protection against the deadly virus, but with the potential limitation that the vaccine was designed specifically for the strain that hit West Africa.

A new study, published in Lancet Infectious Diseases, shows the durability of the antibody responses induced by V920 out to two years after getting the vaccine.  In the study, volunteers had high and stable levels of antibodies to the Ebola Zaire virus, with those received a high dose of the vaccine maintaining, on average, higher antibody levels than people who received a lower dose. However, even at lower doses there were demonstrable levels of antibodies.

At the University of Wisconsin, researchers are experimenting with a form of the Ebola virus that is non-transmittable and therefore safer to work with to develop vaccine technology. The virus name is Delta VP30 and it lacks a gene that the virus requires to replicate itself. Delta VP30 lacks the VP30 gene of the Ebola virus – a minor change – but an essential one.  Lacking this gene renders the virus is incapable of infecting other cells.  According to Peter Halfmann, one of the researchers involved in the development of the VP30 vaccine, the inactive compound acts as a vaccine in the system.  “When applied to humans, it’s just a vaccine,” Halfmann said. “It won’t replicate or do anything. It’ll just give all the proteins to the immune system, so they could make antibodies in an efficient response.”

V290 has already completed multiple studies testing drug efficacy on primates and has shown to be potentially very effective thus far. The Delta VP30 research team expects that human trials for their vaccine may begin as early as 2019 or 2020, making both vaccines real possibilities in the very near future for countries at risk of Ebola outbreaks.

In addition to the V290 and Delta VP30 research, Ad5-EBOV is another Ebola virus currently in the process of being tested, by the Chinese government. This vaccine has also performed well in studies, similar to V290 and VP30, making all vaccine developments strong potential candidates in mitigating the potential damage caused by the Ebola virus.

In the short time the Ebola virus has been around, it has wreaked unimaginable havoc on the countries at risk for the spread of the hemorrhagic fever. Any line of defense against this devastating disease would be life changing for multitudes of people who live with the danger of contracting the virus.