Not So Nobel Awards

Why do old men have big ears? Can smiling at a crocodile affect your desire to gamble?  And most importantly, can cats act as both a liquid and a solid?

These are the questions that keep us awake at night.  Fortunately, there are scientists working diligently on these puzzles, as well as many other weird and curious questions.  Their efforts have not gone unnoticed, and most recently were celebrated at the 2017 Ig Nobel Awards, a scientific recognition of the strangest and most obscure scientific experiments or studies done in that year.

The Ig Nobel Prizes recognize odd and creative contributions to science–achievements that inspire curiosity and are often unexpectedly delightful.  Every year, Harvard’s Sanders Theatre hosts a ceremony in which the winners accept prizes out by genuine Nobel laureates.  The Ig Nobel awards first began in 1991, with their name being a play on the word ignoble, as the awards themselves are somewhat satirical in nature.  Organized by the co-founder of the Annals of Improbable Research, the awards show recognizes amusing and (potentially) useful contributions. There are many awards handed out and all are legitimate, except three given in the first year to non-existent scientists.
On occasion, the awards are critical and not a genuine recognition of achievement, such as when an award for science education was given to the Kansas Department of Education for their work teaching evolution, as it was found to be severely lacking. Usually, though, awards are given for real but humorous discoveries such the idea that black holes fill all technical requirements to be the physical location of Hell, or research on the five-second rule. 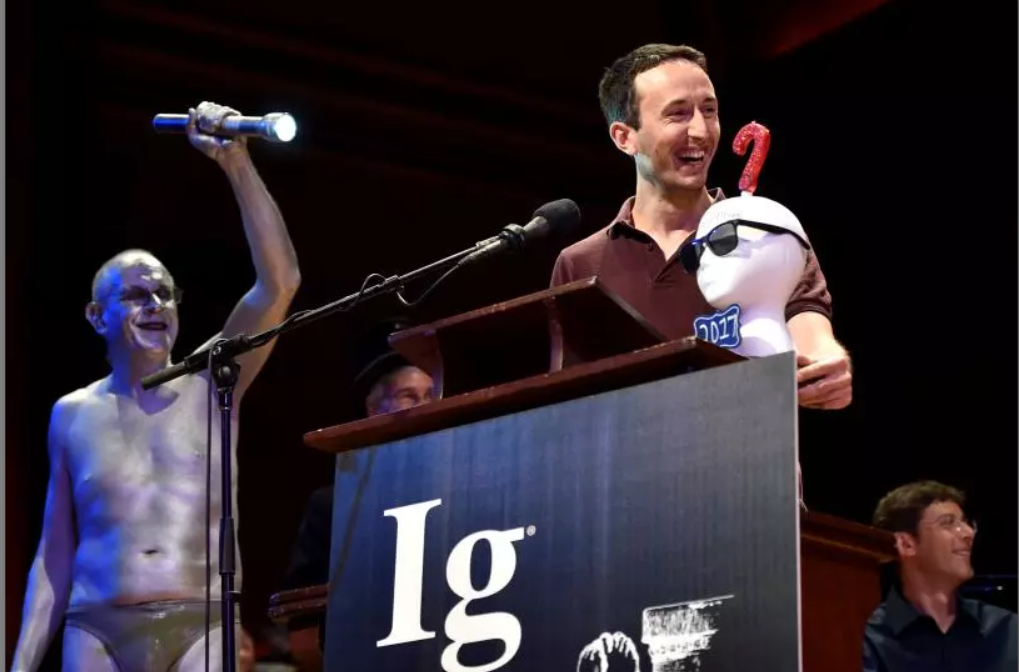 Marc-Antoine Fardin accepts the Ig Nobel prize for Physics. Photo: Reuters/Gretchen Ertl
Winners are given 60 seconds to explain themselves during the prize ceremony since according to Shakespeare, brevity is the soul of wit.  When an awardee exceeds the allotted time, a young girl is named Miss Sweetie Poo is in attendance to interrupt the long-winded scientists by saying “Please stop, I’m bored, please stop, I’m bored” repeatedly until they cease.  Just like the tradition of Miss Sweetie-Poo, there are other traditions almost as frustrating (or amusing), such as throwing paper airplanes on the stage.  Winners received $10 trillion in Zimbabwean currency, worth about $8 when the banknote was issued in 2009.
Some winners of the Ig Nobel award for 2017 include:

Even though the awards show has been criticized for being almost mocking towards research seen as irrelevant and trivial, it’s more accurately an irreverent look at the inner workings of the scientific community, since even trivial research can lead to massive discoveries in ways you would never expect.

In the immortal words of the Ig Nobel Awards closing statement “If you didn’t win a prize—and especially if you did—better luck next year!”