The Relationship Between Sleep and Pain

How does poor sleep affect pain?

Pain affects more Americans than cancer, heart disease, and diabetes combined; an estimated 50 million American adults deal with chronic pain, and nearly 20 million suffer from high-impact chronic pain. For those people that endure chronic pain, it is common to have a hard time sleeping well at night.

UC Berkeley scientists have provided insight into the connection between pain and sleep by studying sleep-deprived brains that suffer from neural malfunctions.  These malfunctions can sensitize patients, intensifying and prolonging the pain of sickness and injury.  Their findings, published in the Journal of Neuroscience, provide one explanation for the global epidemics of sleep loss and chronic pain.

The impacts of pain-related sleep loss on millions of Americans are critical, especially given the number of Americans who suffer from pain. The 2015 Sleep in America TM Poll finds that 21 percent of Americans experience chronic pain and 36 percent have had acute pain in the past week. Those combine to a majority of the nation’s adult population, 57 percent, leaving 43 percent who report being pain free. 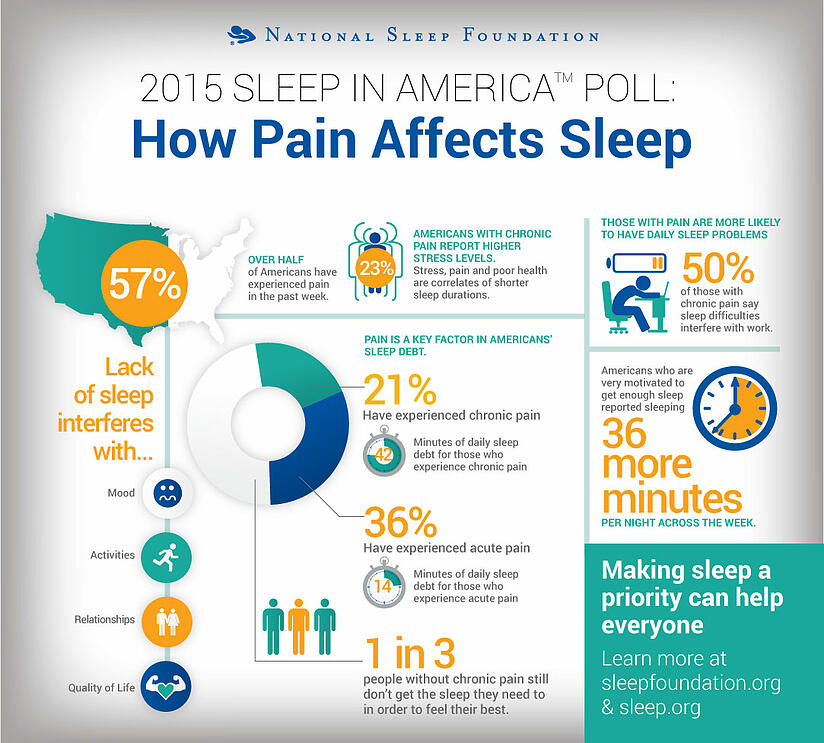 Walker and Adam Krause, researchers at Berkeley, scanned the brains of two dozen healthy young adults while simultaneously applying uncomfortable levels of heat to the legs, causing fitful sleep. During this interrupted sleep, the scientists discovered that the neural mechanisms that detect and evaluate pain signals, then eventually activate natural pain relief, were disrupted when operating on insufficient sleep.  The researchers measured an increased response in the brain’s somatosensory cortex, a response that was expected to increase pain sensitivity.  In addition, they noted decreased activity in the nucleus accumbens, a region of the brain’s reward circuitry that increases dopamine levels to relieve pain.

Unfortunately for those who experience insomnia, these findings were a double whammy. Sleep loss not only intensifies the pain-sensing regions in the brain, but blocks the natural analgesia centers simultaneously.  Activity in the brain’s somatosensory cortex, which receives pain signals, increased 126 percent following a sleepless night vs. a full night of sleep.  Another key brain region found to slow down in the sleep-deprived brain was the insula, responsible for evaluating pain signals and preparing a bodily response.

To further test the sleep-pain connection in everyday life, researchers surveyed more than 230 adults of all ages nationwide.  The results demonstrated a  clear connection between subtle changes in nightly sleep, and the next day pain burden.  These changes were slight, and in fact most of the respondents classified them as minor or unimportant.

Pain and sleep are intimately connected. People experiencing chronic pain are more likely to get less sleep, and those who don’t get enough sleep are at greater risk of chronic pain syndromes. Working through pain and sleep isn’t straightforward, and typically people suffering from pain and poor sleep have to implement a variety of strategies.