Will The Saharan Dust Storm Ruin our Lungs? 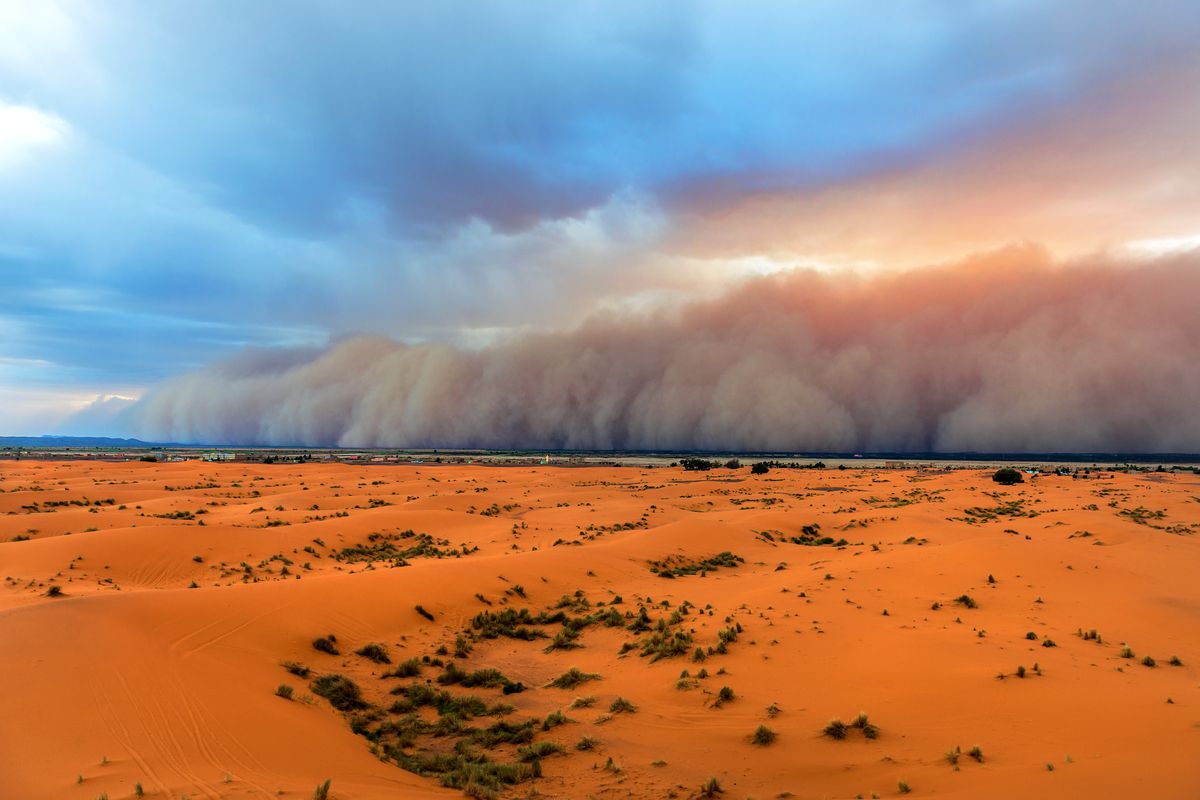 There’s an enormous “Godzilla Dust Cloud” from the Sahara Desert that moving across the land.  It has penetrated deep into the U.S. mainland, and worse, appears to be followed by a second wave of dust, billowing and roiling its’ way to Texas. How did this happen, and how dangerous is it?The how is the easy part.

Hot, raging convection-driven winds blowing over the dessert create plumes of dust up to 20,000 feet high, loading it into the aptly named Saharan Air Layer (SAL). The mix of dust in the SAL, buoyed by hot, dry air, can remain aloft thanks to high-altitude anticyclonic eddies that continually blow it around at heights of about 4 km above the surface, keeping the dust aloft for many thousands of kilometers. The third-largest desert (largest, if you don’t count frozen wastelands like Antarctica) sends forth about 60-200 million tons of mineral dust every year[1], which is more than all human activities combined. It’s enough to attenuate some hurricane seasons because the dust blocks out enough sunlight to cool the Atlantic Ocean’s surface.

The danger to human health is a different matter, trickier to pin down. Moreover, it’s something that people are accustomed to since the dust cloud is a regular occurrence on the U.S. East Coast, particularly the Southeast.   Our familiarity is not necessarily helpful in this case. Large particles typically settle out before the clouds reach the U.S., so we don’t get the kind of clouds that usually block out the sky and make shutting down the economy necessary (this happens during the Saharan dust season in the Canary Islands, near the coast of Africa). Instead, the particles that reach us are much too small to see, as the results of an eight-year study published in the journal Epidemiology show:

“This multiyear analysis clearly shows that the contribution of Saharan dust to size classes <2.5 μm is dominant in terms of numbers and substantial in terms of mass. Over the entire particle size range, 99.5% of the number and 38% of the mass are <2.5 μm during Saharan dust events.[2] ”

Airborne particles smaller than 2.5 um are a huge problem, and most of the time, we’re not aware that we’re breathing them. For most people, in small doses, the effects set in gradually and unnoticed: a little coughing is seen as usual, for example, during the wintertime, with so many suffering from the seasonal illnesses that go around. They’re too small to see, cannot usually be tasted or smelled, and irritate our lungs very severely, but the effects come on slowly and usually slip below our radar. The consequences from the Saharan dust inhalation are probably worse than we imagined; the more general implications of breathing in particles of this size range are devastating for humankind.

The first thing to know about inhaling these microscopic particles, which are just a tad larger than the optical limits of a compound light microscope, is that they don’t just get into your lungs. Of course, they penetrate the lungs deeply, and some of them may sit there, but others manage to enter your bloodstream[3]. They contribute to irritation of the blood vessels, where they are strongly linked to non-fatal heart attacks. These might not kill you, but you probably wouldn’t want one, and anyway, the research is at an inchoate stage, and it would be unsurprising if soon we found out that fatal heart attacks could be provoked as well. They also are linked to cardiac arrhythmias, even in otherwise healthy people.

The most obvious target is even more badly compromised. Lung function is decreased, with an absolute risk of premature for people who have heart or lung disease. Lung disease sufferers can also expect to have trouble breathing, shortness of breath, and irritation of the airways. Asthma suffers have been shown to have aggravated symptoms, and now with Covid-19 affecting sufferers’ lung function, even more people are going to have acute problems with PM 2.5.

But the most significant risk of all associated with PM 2.5 is probably cancer. Probably, because there isn’t enough data yet – but what information do exist show a relationship to many different kinds of cancer. Lung cancer is strongly associated, but its mortality risk increased less than many other cancers – and the range of cancers impacted is enormous. According to the AACR[4], in a massive three-year study of over 66,000 residents of Hong Kong, for every ten ug increase in exposure, the combined risk of dying from any form of cancer rose 22%, and lung cancer specifically rose 36%. But even more surprisingly, the risk of breast cancer increased 80%, and fatal upper G.I. tract cancers rose 42%. Shocking, but the numbers don’t lie, they merely highlight that the bloodborne particulates wreak inflammatory havoc throughout the whole organism (after all, although it’s beyond the scope of this blog, it’s not just humans that are affected).

The best thing that can be said about this problem is that we’re not powerless to stop it. Inside the home, HEPA air purifiers can make a considerable impact in removing PM 2.5. As a consequence of Brownian motion, they release incredibly tiny PM 0.3 and under particles more easily than they do the somewhat larger particles. A true HEPA filter can remove 99.97% of particles 0.3 um in diameter, but even the so-called “HEAP-type” air filters can remove 99% of um 2.0. Outside the home, we need to work on ways to decrease air pollution. We might not be able to stop the Sahara from coughing forth dust every year, but 30% of the world’s dust is anthropogenic, and that dust is made by humans, where humans live.

Cleaning up that 30% could have a considerable impact, and go a long way towards improving human health.